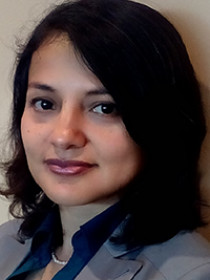 Aliaga-Linares's research interests include urban poverty, segregation, migration and informal economies in Latin America and the United States. She has studied street vending in a number of Latin American cities, including Bogotá, Lima, and Santiago de Chile, and has collaborated with grassroots organizations working with day laborers and immigrant entrepreneurs in the United States. Aliaga-Linares has contributed to many community-based research projects. Prior to her arrival in the United States, she was a community-based researcher for the NGO, Alternativa, in Lima-Peru. During her graduate studies in Austin, Texas, she assisted the Workers Defense Project with the collection of information about day laborer's hiring practices to advocate for the 2005 anti-soliciting bill. Aliaga-Linares has also served as a consultant to various development agencies such as the United Nations Economic Commission for Latin America and the Caribbean and the International Labor Organization. She is also actively collaborating with the Women in Informal Employment: Globalizing and Organizing (WIEGO), and global advocacy network supporting informal workers labor rights.

Why Street-Vendor Relocation Policies Need To Be Rethought

Contrasts the history of street-based farmer's market vendors in Chile with the efforts of other countries to move vendors to off-street venues.

"The Paradoxes of Informalizing Street Trade in the Latin American City" International Journal of Sociology and Social Policy 38, no. 7 (2018): 651-672.

Argues that the incorporation of the informal economy framework into local governments’ policymaking has reframed street trade as a subject of policy. Traces a shift from worker-centered initiatives,through the deregulation of street trade, to entrepreneurial-centered approaches.

Describes the evolution of street vending in these areas, including the move from open-air to roofed markets, and the evictions and marginalization that can occur in these processes.

"Latinos and the Economic Downturn in Nebraska: Demographic and Socioeconomic Trends 2005-2013/2014”," (with Jasney Cogua-Lopez), Office of Latino/Latin American Studies (OLLAS) at the University of Nebraska at Omaha, July 2016.

Analyzes the demographic growth of Latinos in Nebraska, and the impact of the Great Recession on their economic stability and well-being.

"Latino Businesses in Nebraska: A Preliminary Look," Office of Latino/Latin American Studies (OLLAS) at the University of Nebraska at Omaha, 2014.

Traces the specific nature of the growth of Latino businesses in Nebraska.