The Vital Role of Medicaid in American Health Care

Many voters do not yet understand what is included in “ObamaCare,” the health reform signed into law by President Barack Obama in March 2010. They might be surprised to learn that the expansion of Medicaid is a major part of the new Affordable Care Act – scheduled to go into effect between 2014 and 2019. For decades, Medicaid has been a vital part of access to affordable health care in the United States, and it will become an even more important foundation for millions of families if health reform survives.

A Growing and Popular Program

In 1965, the United States enacted Medicare for the elderly – and also Medicaid to help pay for health care for very poor children, the disabled, and seniors in poverty. At first, the types of people eligible for Medicaid were those receiving cash welfare assistance. But as the years went by, Medicaid benefits were extended to many low-income workers. Medicaid has also expanded to cover additional services, such as nursing home care for elderly people who exhaust family resources. Grandmothers and grandfathers in many middle class families end up using benefits.

From the start, Medicaid was popular with a majority of Americans, and public affection for it has only grown. During the budget crisis of the summer of 2011, for example, when citizens were asked whether they supported cuts in Medicaid (defined as “our health insurance program for poor and low-income Americans”) as a way to reduce the federal budget deficit, 72% of the public said they were opposed to cuts, and 54% were strongly opposed. Most Americans want to help the poor, yet Medicaid also touches people and families who are not desperately poor. A recent Kaiser Family Fund Survey found that 51% of Americans have some personal connection to the Medicaid program; a fifth have received benefits personally at some time, and 31% have a family member or close friend is covered by the program

Why the States Have Expanded Coverage

Since the time of conservative President Ronald Reagan, Medicaid has expanded under Republican and Democratic presidents – and governors. Governors are important, because Medicaid has always been run as a partnership between Washington DC and the fifty states. Within general guidelines, states get to set many of the terms about who is eligible and exactly which medical services are covered. The federal government shares the cost with the states, and contributes more of the total cost of Medicaid in states with very needy populations.

The fact that Washington DC foots much of the bill provides a huge incentive for states to expand the program regardless of the ideological proclivities of those in office. Payment for medical care is also important to more than the poor themselves, because hospitals, doctors, nursing homes, and other providers have a stake in getting paid. Even in tough fiscal times, like the budgetary squeeze of 2011, states try to maintain Medicaid in order to take advantage of federal contributions. States certainly looked for cost savings in 2011, and sometimes trimmed special services such as dental care. But only two states reduced Medicaid eligibility in 2011 and, surprisingly, 33 states actually expanded eligibility. They used federal funds to help people thrown out of work get health care.

Obama’s health reform builds on earlier expansions by requiring all fifty states to extend Medicaid coverage to single men, homeless people, and childless couples – to include all Americans who earn incomes less than 133% of the federal poverty line.

Of course, many states run by Republicans are currently challenging the constitutionality of the Affordable Care Act. They argue that the Medicaid expansions will force them to pay more for the poor in the future (even though the federal government will pay 100% of the costs for those newly eligible until 2020, and 90% of the costs thereafter). But, tellingly, all but four states have accepted federal grants to plan the implementation of health reform. Unless the Supreme Court throws out the planned expansions of Medicaid coverage, the states are all likely to find ways to meet the new rules – because they will need and want the additional money on offer.

Medicaid has long been basic to affordable U.S. health care, and as the map below shows, it will expand further in the future – to help one in five Americans by 2020, and more than 30% in many states. 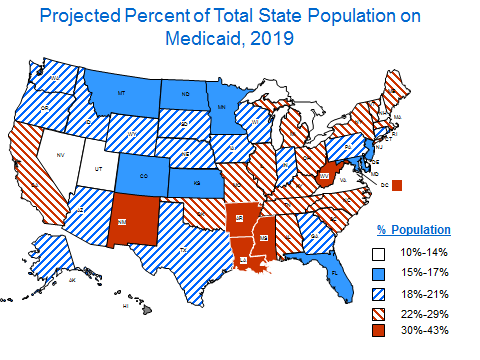 Already robust, public affection for Medicaid will grow as the program solidifies its reach into the middle class. Despite the ideological clamor we hear right now, if the past is any indication, future politicians of all stripes will support Medicaid. Voters know the program is vital, and will demand that their representatives work to keep it strong.

How Protecting Pets Can Help Victims of Domestic ViolenceJuly 10, 2019
How Republican Under-Enrollment Has Made Affordable Care Marketplaces More ExpensiveJuly 10, 2019
Understanding the Dynamics of Medical Marijuana Legalization in the United StatesFebruary 26, 2019