Electricity generation is by far the biggest global warming culprit. Electricity generating plants account for one-quarter of all carbon emissions for which human activity is responsible – and their harmful emissions have shot up by sixty percent over the past two decades, especially as China and India have experienced rapid economic growth. Because electric generation is so important, many researchers and regulators believe limiting emissions from that sector is the key to a low-carbon future. The goal is to do this without undermining economic growth.

One regulatory approach applies new rules to each nation’s entire electricity sector. But would that work? Some critics argue that setting emissions limits for all plants in a sector is a relatively lax approach that will leave individual plants free to keep polluting at dangerous levels. Our research contributes to this debate by paying careful attention to the various rates at which power plants emit carbon dioxide within the electricity sectors of each major nation. We find big variations from plant to plant, and we argue that carbon emissions can be greatly reduced – within each country, and across the globe – if regulators simply focus on lowering the unusually high carbon emissions of each country’s most extreme polluters.

Which Plants Emit the Most Carbon into the Atmosphere?

Our research began with a straightforward hypothesis: not all power plants emit the same amount of carbon, even when you take into account the kinds of fuel they use and the amount of energy they produce. To see if this is true, we turned to international “carbon monitoring” data on power plants’ emissions recently compiled by the Center for Global Development. These are the best available data. Previous researchers have found that a large proportion of toxic pollution can be attributed to only a few facilities. The same is true for carbon emissions, we find.

Consider a simple measurement: what percentage of all the carbon emissions from a nation’s electricity sector is attributable to the top five percent of polluters? For China, the top five percent of polluters account for more than one third of total carbon emissions by all firms in the electric generation sector. The top polluter share is even bigger in other countries: more than 75 percent in the United States and India and upwards of 95 percent in Japan, Germany, and France.

Are the top five percent of polluters simply generating more energy? They do produce a large amount, but these plants also emit more carbon dioxide per unit of energy than the average plant in their sectors. For example, in the United States the worst polluters emit carbon dioxide at a rate 1.42 times greater than the average U.S. energy plant. In India and Germany, this number is 2.85 and 5.11, respectively. In short, a small number of energy plants in the top polluting countries account for the lion’s share of energy-based carbon emissions.

Focus on the Extreme Polluters

What do our findings mean for climate change strategy? Put simply, it’s possible that carbon emissions can be substantially reduced through reforms that target the worst polluters in a sector rather than hitting every firm in the sector with the same rules. 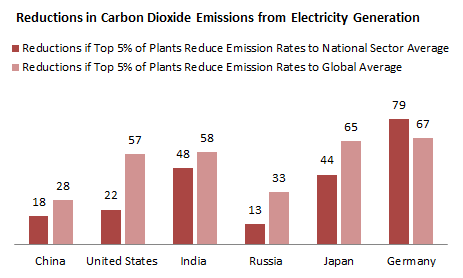 Here is the bottom line: If the top five percent of polluters in each of the twenty nations responsible for most electricity pollution were to reduce their emission rates to the average in their own country’s electricity sector, then world-wide emissions from electricity would go down by one quarter. This amount of reduction is entirely feasible, because an electricity-generating firm can reduce emissions by thirty percent by switching from coal to natural gas. Even sharper reductions are possible with new carbon-capture and control technologies.

The first stages of our research leave additional questions to be answered. But our initial findings do suggest the great promise of aiming regulations at the worst-polluting plants, rather than trying to subject all firms to the same new rules. The more we learn about how carbon pollution works, the better job each nation can do at getting the most of its climate-change reforms.

Evidence-Based Solutions for Addressing Energy InsecurityFebruary 11, 2021
Bridging the Political Divide With Deep CanvassingNovember 2, 2020
Emissions Dropped During COVID-19. Here’s What Cities Can Do to Keep Them From RisingJuly 3, 2020